The purpose of the game is to defend the castle (although it may not be the castle). Enemy monsters will come every wave. Clearing all the waves is your victory.

Defense is done using units. Units include warriors, archers, magic soldiers, catapults, and healers. As you progress through the story, you will have more friends. Not all units can be put into battle. So you need your strategic brain.

The unit uses points to sortie. Points can be earned over time (you can also earn points by defeating enemies).

The Hero of the game has various abilities. He can wield a sword, shoot a bow, and use magic. It’s a valuable character, so try to move it in a way that suits your strategy.
When the unit is defeated, it will retreat from the battlefield. However, the hero is resurrected many times and tries to start the battle again. It will take some time to revive.

The enemy has weaknesses. As you progress through the story, you may find enemies that you can’t beat. In such a case, let’s start by knowing the weaknesses of enemy monsters. If you can make good weaknesses, you may be able to proceed with the battle easily. 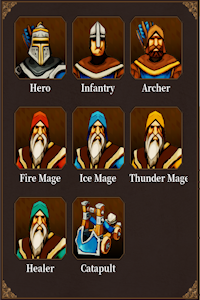 When the man was prepared to die, a golem popped out of the wall. The golem scavenges the monsters at once and saves the man. The golem seems to follow the man. The man succeeded in rescuing the village using a golem.

The village has been badly devastated. The villagers are frightened by the next monster. At the castle in the village, I was worried about defense operations. After hearing the rumors of a fighting golem, the king decides to have the man and the golem participate in a defense operation.

Then the man and the golem will fight the monster with the soldiers of the castle.
Monsters that suddenly appeared in the world. What is the cause? How could the golem break the seal himself? A man and a golem travel the world and search for them.